LOVE IS THE HIGHEST ECONOMY OF LIFE

LOVE IS THE HIGHEST ECONOMY is an installation on the Exeter Phoenix of series of low voltage LED, illuminated text sculptures, originally installed by Still/Moving at different locations around Glasgow for the duration of the recent COP26 conference. The works were made with various community groups around the country during 2021, as well as indigenous representatives and leaders, and with delegates at COP itself. Here, they are presented together for the first time as a message of hope and caution at a time of year when ideas of peace, goodwill and love come into tension with conspicuous consumption and excess.

The title LOVE IS THE HIGEST ECONOMY comes from the powerful and moving words written and performed by the author Ben Okri with his partner Charlotte Jarvis on the penultimate day of COP26 in Glasgow.

With many thanks to Josh Kopeček (ECHOES) for his generous support in creating the switching system that controls the lights and Matt Burrows of the Exeter Phoenix.

LOVE IS THE HIGEST ECONOMY comes from the powerful and moving words written and performed by the author Ben Okri with his partner Charlotte Jarvis on the penultimate day of COP26 in Glasgow.

IT'S STARTED resonates with the Green Meadows values as we recognise there is strength in every individual to make change happen. ‘IT’S STARTED’ also expresses the sense of urgency towards the rising temperatures and how we need to act now.

Tackling climate change can feel an impossible task as an individual and many of the community members we engage with are waiting for changes to start on a national scale. The Green Meadows project aims to empower Meadows residents to take immediate, local action, and tackle climate change together.' Heather Hodkinson, Community Engagement Office, Green Meadows

Ripple Effect is a phrase that was coined by our fantastic School Champions in Chorlton; a group who have brought together an entire community of parents, guardians, teachers and local residents, having turned an initial conversation into tangible climate action. With a focus on improving our streets outside of our schools, the School Champions Network have pushed for safer, healthier and greener journeys for families when dropping off and picking up their kids from school. Change starts on our doorsteps and in our communities, and the Our Streets Chorlton’s School Champions have proven that with purpose and a desire to make change, one idea can turn into activity across an entire area.

Our Streets Chorlton is a community-led climate action project in the heart of south Manchester. We are here to start a conversation, one centred on how local people can help to reduce carbon emissions by enabling Chorlton people to reduce local and short car journeys https://ourstreetschorlton.co.uk/

'Remote, peripheral and perched on the North Atlantic shore, Bude is exposed to the force of thousands of miles of steadily rising ocean and increasingly fierce winter storms hitting its shoreline, putting it very much ON THE EDGE – physically and metaphorically – of the sharpest impacts of climate change. As the most sensitive location in the UK to sea-level rise, our challenge as a community is to find ways to protect our town, our way of life and our cherished coastline, parts of which are currently retreating at a rate of a metre a year, while also reducing our own impacts on the climate crisis. Bude Climate Partnership has united community and environmental groups in working together to make positive changes that will ensure our town, its surrounding communities and landscapes have a long and safe future ON THE EDGE of Cornwall, Britain and the sharpest impacts of the climate crisis.’

"Article 8 of the Paris Agreement outlines the responsibilities of countries to take action on loss and damage. Addressing loss and damage stands alongside mitigation and adaptation as a fundamental pillar of climate action. But despite signing on to the Agreement, the wealthy countries who contributed the most to causing loss and damage are still unwilling to provide the finance and support needed to address it." https://ldyouth.org/what-is-lo... During this COP Scotland become the first rich country to publicly contribute to Loss and Damage by giving 1 million. Over the following days at COP other countries are also finally rising to this responsibility and paving the way for reparations.

Originally conceived in a pilot project with #LetterstotheEarth aimed to link the G7 meeting in Carbis Bay to the COP26 climate summit in Glasgow. Through conversations on the street and workshops we wanted to find out what local people felt needed to be said. People expressed there need TO BE HEARD. In COP 26 partnering with LTTE (Listening to the Land Pilgrimage) Still/Moving showed this work at to Kelburn Castle on Sunday the 7th November where many Indigenous elders and Delegates from Climate Vulnerable countries were hosted along with the pilgrims.

This seminal phrase is key to the work of environmental lawyer Farhana Yamin: "Justice Reset" is a unifying demand to COP26. It gathers all constituencies whose call for climate justice and just transition recognises the need for a complete overhaul of the existing system by shifting resources and political power to those with less. 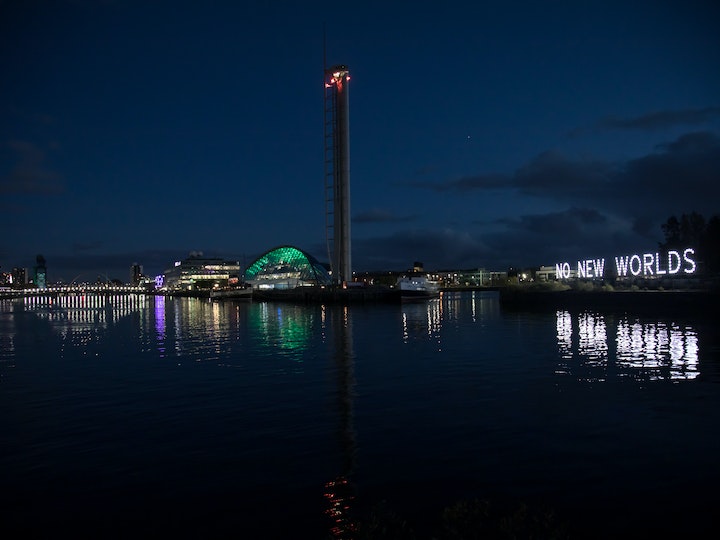 NO NEW WORLDS in Glasgow for the duration of COP26 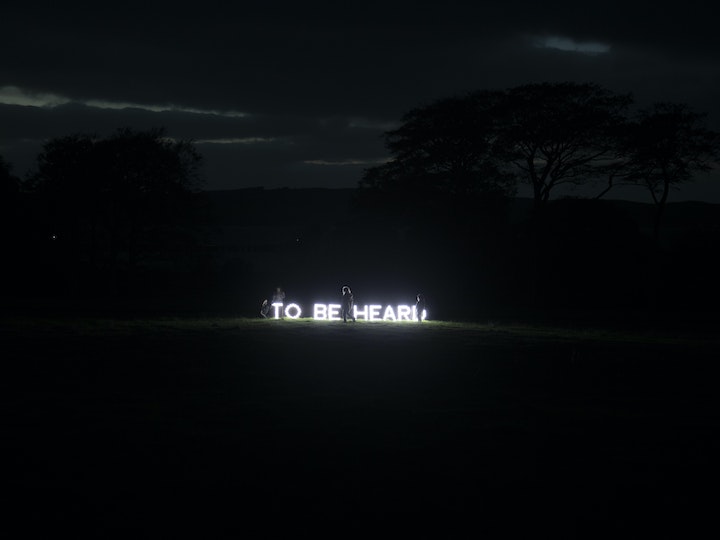 A series of light text sculptures installed around Glasgow during COP26 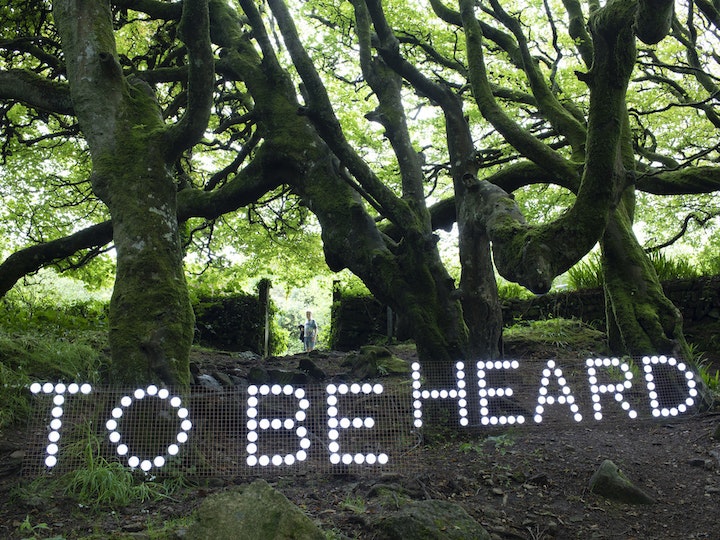 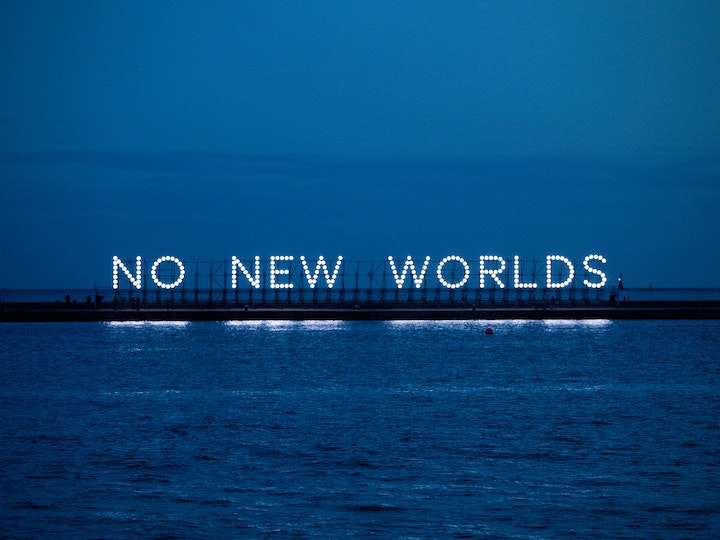 A site-specific Installation, SPEEDWELL was a 67m long illuminated text work on Plymouth’s Mount Batten Breakwater designed to provoke reflection about the human impulse to explore new worlds, and the repercussions of this behaviour. 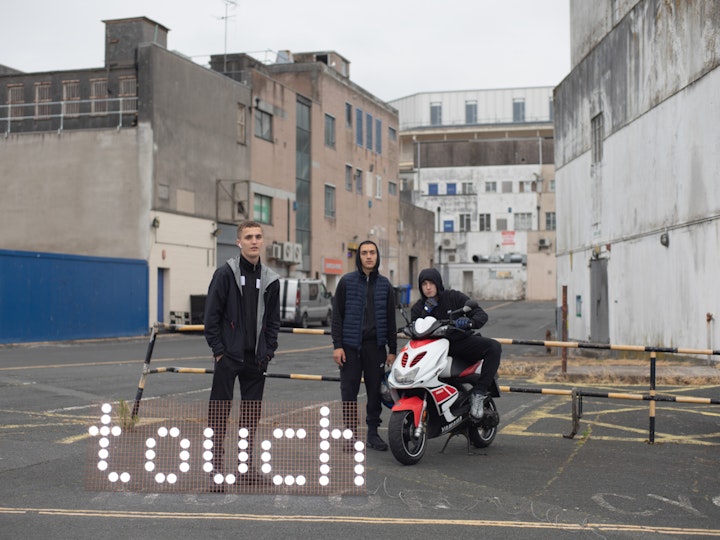 touch : A COVID 'State of Emergency Commission' for The Box, Plymouth

'hold me' is a site-specific installation by Still/Moving for 2020 Plymouth Art Weekender.