Thank you for your interest in Amplify. On this page you can send a voice recording and we will transcribe it. You can record using the orange button above.

Please say your name and lineage should you wish to to highlight it.

In England, the 400th anniversary of the Mayflower’s sailing is being marked by two events that involve Indigenous voices. Most other planned events – now cancelled – had little regard for the impact of the Mayflower on indigenous peoples.

The first event is the switching off of the lights that form the sculpture Speedwell (No New Worlds). The second event, Amplify, enables voices from different perspectives to be heard in response not only to the Mayflower, but also to other deep changes that we see all around the world.

People and communities everywhere are becoming aware of global interconnectedness and the interdependence of all life. As current systems of economics, wealth generation, governance and decision-making seem to be failing, the time to listen to the world’s Indigenous peoples has come.

At last, Indigenous voices are beginning to be heard, as evidenced by the SCOTUS decision on McGirt vs Oklahoma, #NoMoreMascots forcing NFL’s Washington team to ditch their brand, and the continuing relevance of #NoDAPL. Black Lives Matter, too, shows that the desire for change is now the norm.

How can you take part in Amplify?

We want a word or phrase or stories that speak to this time from people in North America.

Speak with honesty and truthfulness, without violent or discriminatory language, about however you are feeling and whatever message you want to share. We want your voice to be heard in Plymouth, England, from where the Mayflower left their Europe for an America that is still feeling the impact. Words will be read (or broadcast) there on the 26th November in a ceremony to mark the anniversary and to summon the dawning of a new era. The ceremony will also allow time for silence, unspoken feelings and thoughts to be witnessed. Still/Moving will enact two processes: The permanent turning on of NO NEW WORLDS (with no changes to other iterations) to mark the day. And inviting peers, partners and audiences to light a ‘beacon’ such as a candle or fire of light to acknowledge the day, posting it on social media with the following hashtag: #NoNewWorlds.

In November, Still/Moving would like to give over our social media channels/platform exclusively to voices of Indigenous people. A space where we listen to what they feel needs to be said, focusing on Indigenous American perspectives both past and present. This will be in the 26 day lead-up to the Indigenous Day of Mourning. 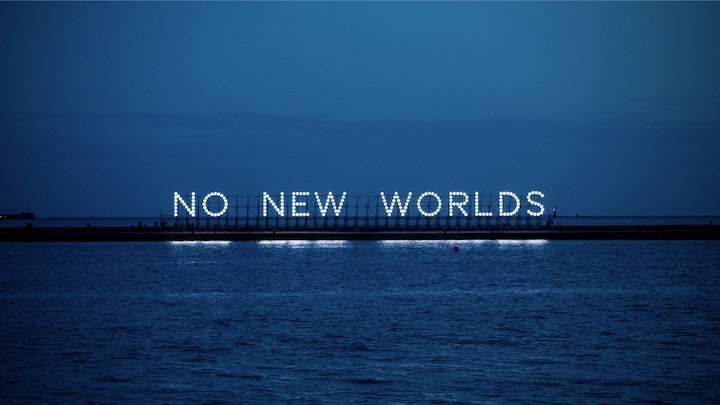